A referendum is not (and should not be comparable to) a general election; they are two different kinds of electoral instruments. The former asks the people to express their opinion on one or more issues (usually by means of a yes or no option). The latter instead allows them to choose which leader or political party should govern the country.

Yet the line between the two is often blurred. Especially when the people are asked to vote on particularly controversial issues, and after a hard-fought campaign, it is not uncommon for the outcome of a referendum to be interpreted as a de facto vote of confidence for or against the incumbent government. It happened last June with Brexit in the UK, and it has happened now in Italy.

On Sunday, over 19 million Italians, about 59% of the voters, rejected a controversial package of constitutional reforms supported by the incumbent government. The “Yes” camp did much worse than expected, barely breaking over 40%. It received 7 million fewer votes than the “No” supporters.

The turnout was over 65%, 10 points down on the 2013 general election, but more than enough to make the vote legitimate.

The people have spoken, loud and clear. So must the government resign?

For Prime Minister Matteo Renzi the answer to the question seemed clear. As promised, soon after the outcome of the referendum was announced, he resigned. Standing before the press, “with a lump in his throat” because, as he admitted, “we are not robots”, he took full responsibility for the unequivocal defeat.

Renzi’s strategic mistake, his insistence during the whole campaign on making the result personal, has effectively reduced the possibility of the current government staying on to almost nil.

The crisis is officially open. What comes now is difficult to say.

There are three possible scenarios, all involving Italian President Sergio Mattarella. The constitution grants him the power to do one of the following:

The most unlikely scenario is a second mandate for Renzi. Though he has now agreed to stay on a little longer until the new budget is approved, his resignation is final. It would make little sense for him to carry on without a full electoral mandate.

The second scenario, however, as I hinted in my last article, would not surprise anyone. The only problem might be to agree on the choice of the new prime minister. At the moment, there seems to be no one with enough credibility and bipartisan support to be able to govern for the next 16 months, let alone pass some much-needed reforms.

Someone from the existing coalition might be the easiest choice (though not the most popular). Among the favourites are Pier Carlo Padoan (the incumbent minister for economy), Graziano Delrio (minister for infrastructure), Piero Grasso (Senate president), or even Laura Boldrini (president of the Chamber of Deputies) – though it is unlikely, the moment might be right for Italy’s first woman prime minister.

The third scenario is for Mattarella to call the election, one year ahead of time. But facing an election with the current electoral law is a gamble not many in the parliament would want to take. Though the current parliament approved the new law in 2015, it was mostly the product of Renzi’s government and many MPs still think it needs to be amended or, worse, replaced with a brand new one. Or the existing law might be the harbinger of disaster at the next election.

Who will win the next election?

Before the referendum result, voting intention polls showed the Five Star Movement and Renzi’s Democratic Party locked in a virtual tie, more or less, at 30%. While, the centre-right coalition led by Silvio Berlusconi lagged few percentage points behind. Some polls indicated the Five Star as favourite, others the Democratic Party.

In any case, none of the existing forces seems strong enough to reach the 40% threshold needed to win under the new electoral law. This means the two parties with the most votes will face off in a second round. Second rounds are never easy to predict; the results often depend on how the supporters of the excluded parties vote. And with the new law the winner takes it all.

At the moment, many in the establishment fear that the populist appeal of the Five Star Movement makes it the most likely winner. Since it reached 25% at the last general election, the movement’s electoral results (and the polls) have been rather consistent. Last May it captured two major cities, Rome and Turin (along with 17 others).

With Renzi’s aura fading, the Democratic Party is potentially without a winning leader and might need some time to recover. Should Renzi remain as party leader or should the party find someone else? It is not an easy choice to make right before an election. Change will send the wrong signal to the electorate: the party is in disarray.

On the other hand, to stay with Renzi will mean the party doesn’t listen. Either way, going to the ballot next February with the current law and in the current climate might mean a political debacle for the party, which attracted 40% of the vote at the last European elections only two years ago.

The centre-right is not in better shape. Elections will certainly represent a gamble for Berlusconi and his Forza Italia party, not long ago the leading force in the country.

Despite unceremoniously stepping down from government in 2011 and then being barred from running for office by law in 2012, Berlusconi is still very much an active and influential player in Italian politics. However, his many troubles with the law, his failing health and his age (he recently turned 80) have all taken a toll on his charismatic leadership.

The controversial entrepreneur’s political demise has sent the shaky remains of its past coalition into a frenzy (especially now, after Renzi’s resignation and the possibility of a new election in the air). Leadership is up for grabs, but it is far from clear who the chosen one will be.

The new leader could be a woman, but will most likely be a man. After more than two decades of Berlusconismo (with its unapologetic defence of male chauvinism), it is unlikely that the centre-right is ready to respect a woman enough to appoint her as a leader – unless of course the woman is very close to Berlusconi.

On the other hand, within Forza Italia’s ranks (let alone within its wider, wobbly coalition), there seems to be no viable successor to the flamboyant leader with the winning smile who defined Italian politics for so long. The situation, however, is no longer as static as it might have appeared a few months ago.

Matteo Salvini, the provocative leader of the right-wing Northern League and one of the strongest advocates for new elections after Renzi’s resignation, has recently put forward his candidacy.

Inspired by Donald Trump’s victory in the United States and a fervent admirer of Marine Le Pen in France, Salvini thinks Italy is ready to finally shift decidedly towards the right and elect a leader with strong (some would say extreme) views on immigration, the European Union and the economy. However, with the Northern League polling at just over 12%, Salvini will need the full support of the centre-right if he wants to have any chance to become Italy’s next prime minister.

Though this is not an unthinkable scenario, it is unlikely. Stirred by the success of right-wing populists across Europe and the US, the centre-right might eventually decide to bet on a leader like Salvini. But this would be a complete change of direction, which might ultimately alienate the larger part of the centre-right electorate. The Catholic and middle-class voters will likely migrate towards the more moderate Democratic Party.

Salvini’s greatest strength is also his ultimate weakness: he is not Berlusconi. He is not charming. He doesn’t have a winning smile. He is not a great salesman. The media don’t love him as much as they loved Berlusconi.

And Salvini’s policies, especially on immigration, are not unlike Trump’s: they are truly borderline, if not wholly, racist. Italy’s permanence in the EU would certainly be at risk with someone like Salvini at the helm.

Ironically, as I pointed out in my previous article, the ideal candidate for the centre-right would be another Matteo, as in Matteo Renzi. Unfortunately for Berlusconi and his coalition, Renzi has chosen the opposite side, the Democratic Party.

But as Renzi might soon resign from his party as well, perhaps Berlusconi will be wise to approach him. It might well be in the realm of fantasy politics, but Renzi might be willing to listen and become the leader of a strong and wider centre. After all, for over two years he has governed the country, also thanks to Berlusconi and with some of the entrepreneur’s former allies.

Before anything is decided, however, President Mattarella must consult with all forces in parliament. At the end of the consultations, the result might be an election, a known name as prime minister, or a true surprise.

The surprising name pulled from the hat might be that of Luigi di Maio (Laura Boldrini’s deputy in the lower house). Di Maio is the most popular representative of the Five Star Movement (after its founder, Beppe Grillo).

The choice of Di Maio might be quite tempting for all parties involved. It would finally give the chance to the movement to govern, to pass some important reforms and, most importantly for the other parties, to avoid the spectre of elections for the time being. The Five Star Movement, in fact, along with the right-wing Northern League, is among the loudest voices calling for new elections.

Though the choice of Di Maio is not that unlikely, the possibility that he (or for that matter, anyone else from the movement) actually becomes prime minister is rather thin. This would be a risky proposition to accept without a true majority. As things stand at the moment, Grillo would most likely reject the offer. He would consider the compromise with the establishment a strategic mistake, as he did in 2013 when he turned down the offer from Pierluigi Bersani, then Democratic Party secretary, who was in desperate need of an ally to govern.

If a temporary solution cannot be found and an election is called, under the current electoral law, the election might lead to political bloodshed. In a climate of widespread discontent with the country’s political establishment, the new law and its proportional mechanism that gives the winner an automatic majority in parliament, most of the parties in the current government coalition might be erased from the electoral map. Though that might provide some sweet schadenfreude to many disgruntled voters, it might eventually cost Italy dearly.

The ultimate winners of the coming electoral melee are likely to be untested populist forces with a strong anti-European sentiment and some more questionable political ideas. When something similar last happened, Italy ended up with two decades of Berlusconi. The ride was far from fun and the bruises are still there for everyone to see. 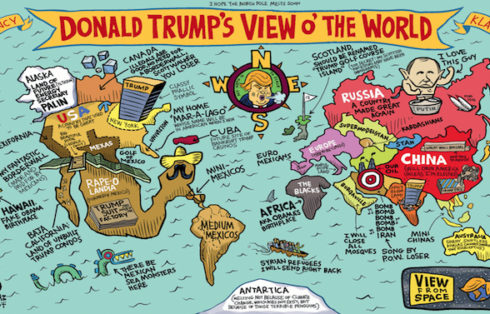 November 13, 2016 - 12:01 am
This article was originally published on The Conversation. Read the original article. Dear Mr President-elect...
© Copyright and Web Design/Management by Giovanni Navarria, All Rights Reserved.
We use cookies to ensure that we give you the best experience on our website. If you continue to use this site we will assume that you are happy with it.Ok