COVID-19: Stay at home, they say. But what about the

The Coronavirus outbreak is rewriting the rules of social living across the world. Amid sharp increases in the number of infections and deaths, whole countries have enacted draconian rules and shut down all non-essential businesses as well as enforcing social distancing (a sure candidate for the 2020 catchphrase of the year).

After China, the new epicentre of the crisis is in Europe. Italy and Spain have been in strict lockdown for several days now. Many other countries, though at first somewhat reluctantly, have followed their example. The UK government, after weeks of mocked indecisiveness, on Monday finally announced more stringent measures to fight the spreading of the virus.

Stay at home, Resta a casa, quedarse en casa, bleibt zuhause, Dai Zai Jia Li (待 在 家里), along with their equivalent translation in all other languages, have quickly become a new mantra for millions of people, all forced to stay indoors, secluded from public life for the foreseeable future, for to go out, to socialise, to live a normal life, are all now considered dangerous activities.

Politicians and experts have worked overtime to warn us of the danger of breaking the new rules: we will follow the same path we have seen in Italy, where in the last four days there have been over 2000 deaths, more than 500 a day, and the total number of victims is fast approaching 7000.

Naturally, hashtags like #Stayathome or #stayathomesaveslives have been trending on social media for weeks. And the Internet has been flooded with videos of celebrities and less known personalities telling their followers that staying indoors has, after all, its advantages.

Forced confinement, many suggested, is a chance to appreciate more what we already have and finally do all those things that we usually seem to put aside for lack of time. And if we really get bored, with a little bit of imagination and a fast-broadband connection, the list of safe activities we can do is almost endless.

If the online world is not for you, there is nothing worry about. Pick a book and travel from your armchair. The writer Joanna Harris listed places like Narnia, Middle Earth, or Hogwarts among the perfect locations to visit during lockdown.

Others, like Ivanka Trump, have shown how to camp out in your living room. It is “a fun activity” she wrote on Twitter “that also brings family together for a meal!” 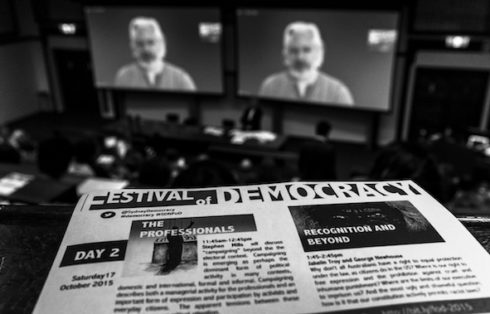 February 27, 2020 - 7:21 pm
Here some of the photos I took between 2013 and 2016 at some of the events organised by the Sydney Democracy Network....
© Copyright and Web Design/Management by Giovanni Navarria, All Rights Reserved.
We use cookies to ensure that we give you the best experience on our website. If you continue to use this site we will assume that you are happy with it.Ok