Atomic Blonde, with its beautiful Berlin set, and especially thanks to the performances of Charlize Theron and James McAvoy, is pretty entertaining and worth the price of admission.

Take Jason Bourne, James Bond, La Femme Nikita, Agent Salt and more than a few extracts from the dozens of movies set in the backdrop of the Cold War, put them all in a large mixer, sprinkle with some cool shades of blue and green, and a few warm tones; add some loved tunes from the 80s (Depeche Mode, Queen, Falco, Nena, New Order among others), a handful of breakdance moves, some mean-sounding Russian and the never too-friendly German, a Ronald Reagan’s speech, an infamous city Wall, and a few Trabants; then, finally shake, don’t stir, and you get Atomic Blonde: a quite entertaining spy/action film almost entirely set in Berlin, in November 1989, during the days leading to East Germany’s sudden implosion.

Based on Antony Johnston and Sam Hart’s graphic novel The Coldest City and directed by David Leitch (in his first real feature-length directorial debut), the film stars Charlize Theron as Lorraine Broughton, the titular atomic blonde. A British MI6 agent, Broughton is sent to Berlin to retrieve a valuable asset gone missing. The asset is a list containing the names of several under-cover operatives, including that of “Satchel”, MI6 most wanted double-agent. James McAvoy is David Percival, Broughton’s point of contact and MI6 Berlin station head. From the very start, Percival appears to be a very shady character, far from reliable. Moonlighting as bootlegger-small-time-crook, the first impression we have of him is of a somewhat borderline-rogue agent, whose motives are never entirely clear, expect for the fact that he loves Berlin and he doesn’t want the city to change. Apparently, he has gone too far trying to blend in, he “has gone native”, as one of his superiors puts it. “C”, MI6 Chief (James Faulkner), warns Broughton to trust no one if she wants to retrieve the list and uncover the real identity of Satchel.

The film is structured as a series of flashbacks, while Broughton is debriefed in London. She is telling her superior her version of what happened in Berlin. Until the end, we are not entirely sure whether her mission was successful, but it is clear that not everything has gone according to plans. Though not very original, the debriefing is a useful plot expedient which allows Leitch to jump cut to new scenes without excessively disrupting the pace and the narrative flow of the movie.

As it is to be expected in these kinds of action-packed films, Broughton and Percival are surrounded by a score of one-dimensional characters, which serve mostly the purpose of moving the plot along while rarely showing any spark of life. Sofia Boutella plays Delphine Lasalle, an inexperienced and naïve French operative who somehow becomes Broughton’s love interest; John Goodman is Emmet Kurzfeld, a world-weary CIA agent who is helping MI6 to retrieve the list; Eddy Marsan is Spyglass, the Stasi agent who provided the original list in exchange for safe passage for him and his family to the West. He has also photographic memory which makes him a valuable living backup of the missing list. Spyglass is the most interesting of the supporting characters, unfortunately the script and Leitch make very little use of him. Danish actor Roland Møller plays the nasty rusky Aleksander Bremovych; while Broughton’s direct superior, Eric Gray has the face of Toby Jones, who once again plays one of those ambiguous spies that since his Percy Alleline turn in Tinker, Taylor, Soldier, Spy has become a staple of the British actor’s repertoire.

Despite Toby Jones’ characterization of Eric Gray, Atomic Blonde is not Tinker, Taylor, Soldier, Spy, nor is it The Spy Who Came in From the Cold, or the underrated and beautiful A Most Wanted Man (incidentally, all John Le Carre’s adaptions), but, in fairness, David Leitch’s film never intends to rival those kinds of movies. Still, what kind of movie the director is trying to make is difficult to say, beyond a roller-coaster take on the spy genre with a kick-ass female character. One of the reasons why Atomic Blonde fails to project a self-confident sense of purpose and identity might be its faltering mood, which is too often off-balance between a vague of sense seriousness and very little (slef)irony. Charlize Theron’s excursus in the spy-genre is filled with slapsticks acrobatics, but it is almost totally devoid of humour. Despite playing the same game and working for the same employer, Lorraine Broughton is not James Bond when it comes to wit (surely not the one from the Roger Moore’s era, but she can’t even compare with Daniel Craig’s 007 in Casino Royale). This lack of humour is one of the film’s greatest sins. Luckily, McAvoy’s Percival – always stuck between looking homicidal/paranoid and high – gives the audience some welcome comic relief action. Eddy Marsan’ Spyglass also shows (untapped) potentials, especially when he is paired next to Theron’s killer-machine Broughton. It is not accidental that the two only truly perfectly timed comic moments involve Spyglass (and a grey duck-tape) and in another case Percival (and a knife in the back). But it is too little too late. It would have been wiser for Leitch to inject more life and some lightness in and around Theron’s character. A few brushstrokes of self-deprecating humour here and there might have done miracles and help Leitch better balance the movie’s overall tone. The comic tempo of Simon Pegg’s Benjamín “Benji” Dunn is one of the reasons why Tom Cruise’s Mission Impossible is still a successful money-making franchise.

Theron shines as a kick-ass spy

Most of Theron’s screen time is spent either in a bathtub filled with ice-cold water to help her bruised body recover or fighting villains all over Berlin. Ok, to be fair, the film does not have so many bathtub scenes, but surely it has more than a handful of fights. And it is all great rewarding fun for the viewer. Luckily for the spectator, the film is free from the dizziness-inducing hand-held camera movements that have plagued much of the action genre since the success of Paul Greengrass’ Jason Bourne’s franchise. Leitch adopts a different strategy: rather than hundreds of cuts and close ups, he shoots the scenes using mostly medium and wide angles. The result is a series of intense and well-choreographed fight scenes, which successfully maintain a certain rawness that makes them more real and surely beautiful to watch.

Leitch’s direction deserves praise, but is Charlize Theron’s captivating performance that is indeed the film’s strongest asset. Though probably a few thumbs up go to her stunt’ skills, Theron nails the part. She has the body, the acting skills, the killer look, the right voice and pace to channel a fascinating, ice-cold, deadly Lorraine Broughton. As last year, Mad Max: Fury Road showed audiences worldwide, in the small circle of A-list female action-stars, Charlize Theron is second to none (even after Gal Gadot’s spectacular turn in Wonder Woman).

Lassalle is the weakest link

One of the weakest (and in fact annoying) plot-points of the film was the relationship between Broughton and Lassalle. The sex scenes seem rather gratuitous. In this case Broughton is very much like Bond. The viewer is never really given a chance to care for this relationship or for the young and rather clumsy Lassalle. Seemingly, the only purpose of Sofia Boutella’s character is to lure the interest of male movie-goers (usually the target audience of the spy-thriller genre). The two (brief) sex scenes between Broughton and Lassalle seem shot and thought from an exclusively male perspective. Would two women really make love with each other the way Leitch directs the scenes, or is it more the case of how a man imagines to have sex with a woman while being a woman?

Despite the rather thin, mildly predictable script, the abundance of one-dimensional characters, and even with some shots suffering a great degree of unintentional and unusual lens distortion (walls, doors and buildings in the background), Atomic Blonde, with its beautiful Berlin set, and especially thanks to the performances of Charlize Theron and James McAvoy, is pretty entertaining and worth the price of admission. I am certainly looking forward to Lorraine Broughton next mission.

Photos: All That Swing 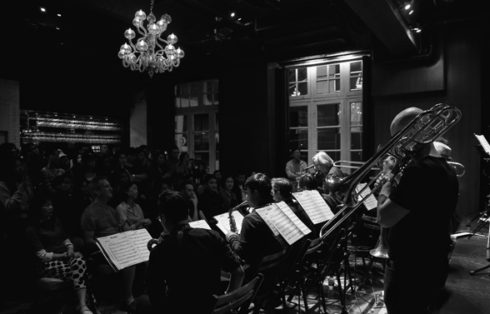 Photos: All That Swing

April 30, 2017 - 4:36 pm
All That Swing - The Saturday Night Jazz Orchestra and Vivian Poon These are some of the pictures (in low res)...
© Copyright and Web Design/Management by Giovanni Navarria, All Rights Reserved.
We use cookies to ensure that we give you the best experience on our website. If you continue to use this site we will assume that you are happy with it.Ok