Not very cautious, with some lust, but a bit lost

Ang Lee‘s latest movie, Lust, Caution is probably not one of his best, yet it is worth a trip to the cinema. As always with Lee, the movie is beautifully shot, the acting firm and truthful. Yet I expected more. 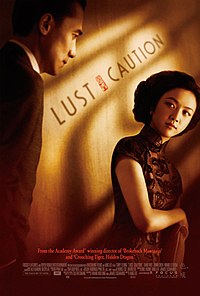 It is too long and the story so simple that sometimes seems too weak: it is based on a short story about a woman (Wei Tang) who in 1942 Shanghai  tries to help the Chinese resistance to kill the head of the police, Mr. Yee (Tony Leung) a collaborationist of the Japanese army that controls China. She gains Yee’s attention and becomes his lover. The relationship between the two is very intense and, rightly, the movie needs time to build up the tension. But the focus is too much on the lovers, while the other characters become mere shadows, one-dimensional characters. Yet, some scenes are simply beautiful. The sado-masochistic tension in the sexual intercourse between the veteran Tony Leung opposite newcomer Wei Tang are so intense that the spectators feel like they are peeping into the privacy of two kinky lovers: a master and a slave.  Comparing those scenes with the rest of the movie, one has the impression that Mr. Lee made the movie only to be able to shoot those few scenes between Leung and Wei. It deserves some mention the part of the movie where Ms We, a virgin, has to learn how to make love to be able to become a convincing lover for Leung’s characters. After all, she is pretending to be the wife of a businessman, therefore expert enough in matter of sex. That part is well done, perfectly acted by Ms Tang, it is a series of almost speechless scenes where she goes from being a virgin to mastering some kind of art of love.

Overall this is a good movie, probably overrated.