After Brexit, Keep a Close Watch on Italy and Its Five Star Movement

On Thursday, in a decision that shocked many observers, the majority of the British people voted to leave the European Union. It was a slap in the face to the established political elites, the majority of whom had strongly supported the “Remain” campaign.

The Brexit referendum was a historic moment that will not only redefine the future of the United Kingdom, but also “rattle the Continent and rock political establishments throughout the West”.

Eurosceptism is deep-rooted throughout the Union. About one-third of the current 751 MEPs in the European Parliament in Strasbourg are representatives of anti-EU parties. France, Holland, Denmark, Sweden and Italy all have already rising numbers of populist parties campaigning against the EU’s interference in their country’s affairs.

After the UK referendum, many of these parties now want the same in their countries. “Victory for liberty!”, commented Marine Le Pen, the leader of France’s far-right National Front party, who wants France to follow in Britain’s footsteps. There is a clear and present danger that the desire to leave may quickly spread like a virus across the whole EU.

One country to keep a close watch on is certainly Italy where, only a week ago, the eurosceptic Five Star Movement scored a milestone victory in the second and final round of local elections. While the turnout was quite low (below average at just above 50%) the meaning of the result was loud and clear: Italy’s politics is once again in turmoil and, this time, it is much more than a protest vote.

It was a resounding defeat for Prime Minister Matteo Renzi and his Democratic Party and a remarkable feat for the Movement – even more significant than its success at the last national election in 2013. “Rome is ours”, “Now it’s our time”, “Let’s change everything”. Such were the cries of joy (that is, the hashtags) around which Five Star Movement supporters gathered online to celebrate Virginia Raggi and Chiara Appendino, the newly elected mayors of Rome and Turin.

Raggi received 67% of the preferences (twice as much as Roberto Giachetti, her opponent) to become the Italian capital’s first-ever female mayor. Appendino gained 54%, ten points more than Piero Fassino, the former mayor of Turin.

Started in 2009 as a natural offspring of the comedian Beppe Grillo’s blog and as a rebuke of the political establishment’s lack of interest in the initiatives of the blog’s supporters, the Five Star Movement has come a long way. Its first run in 2012 was successful, but far from spectacular: it won mayoral seats in the important city of Parma, along with the smaller centres of Comacchio and Mime.

But less than a year later, in February 2013, it surprised everyone at the general election when it received 26% of the national preferences, which translated into 54 senators and 109 Chamber of Deputies representatives. This was quite an unprecedented result for a first-timer.

Overnight Grillo’s Movement became a major political force in Italy. Only the highly criticised electoral law prevented the Five Star Movement from taking control of the parliament (which went to a coalition between the left and centre-right parties).

Many argued that the Movement’s victory was a fluke; that Grillo and his followers had capitalised on the widespread discontent of Italian people; that the 26% mark was most likely more the result of a protest vote against the establishment than genuine political affiliation.

The suspicion was somewhat confirmed by the Movement’s tame performance at the 2014 European Union election. Its 21% of the preferences, though far from a bad result, paled in comparison with the 40% of Renzi’s Democratic Party. But EU elections in Italy and elsewhere in Europe are not always indicative of what the electorate really thinks of the major parties.

The last two years, however, have been an important learning experience for the Movement. During this time the popularity of Renzi’s leadership suffered from a stream of arguable policies, scandals, Democratic Party in-fighting and the widespread feeling that Renzi himself was neither that much of a leftist nor that much different from Silvio Berlusconi, the controversial leader of the centre-right.

So it is not surprising to find out that, halfway through its first legislature, despite a series of setbacks and defections, and less-than-exciting results at the last round of European elections, the Movement is still among the favourites for next general election in 2018.

The victories on June 19 have only reinforced its status as a possible front-runner. The Movement won in total 19 of the 20 mayoral seats where its candidates had reached the second and final round of elections; all contests were against candidates of the Democratic Party. The average age of the winners (seven women and 12 men) was 39.

These are not flukes. The Five Star Movement is here to stay.

These results not only shake Renzi’s aura of electoral invincibility, but also tell us something about the state of turmoil that Italian politics is in once again.

The victories in Turin, the home of Italy’s automotive industry and a core Democratic Party constituency for the past 16 years, and in Rome, the country’s capital, usually a battleground between the old left and the centre-right, send important signals. The political pulse of the nation has changed its rhythm.

The growing disconnect between the people and party politics has rendered irrelevant the historic division between left and right. This has opened the door to new political forces whose appeal goes beyond that old paradigm and runs across the whole political spectrum.

The Movement’s success tells us that the old alternatives have lost their charm; that the Democratic Party has lost its momentum; that the centre-right hasn’t yet found a valid substitute for Berlusconi’s charismatic leadership; that the country (especially at local level) is in deep crisis and needs politicians who are not just content to sweep the mess under the rug.

Italians are looking for a political force that will deliver real change. The local election victories also tell us a different story about the quality of the Movement’s politics. If its anti-establishment and anti-political stances were crucial in its early stages to set the Movement apart from the rest, they are not enough to explain its continuing growth.

The Movement has now been tested both at national and local levels. If one electoral success may well be the result of an electorate on the warpath against established parties, a stable and recurring string of wins is confirmation of the Movement’s political strength.

Grillo and his followers have become staples in Italy’s political sphere. They are not anti-political – quite the opposite. What the Movement does is simply politics – it openly challenges who gets what, when and how. It reminds citizens that politics is first and foremost about solving problems that hinder people’s quality of life and about speaking truth to power, not using Twitter to sell “aria fritta” (fried air, as Renzi has been sometimes accused of doing).

So, it cannot come as a surprise that the Romans rewarded Raggi, seemingly the only candidate who openly committed to tackle issues of corruption and a lack of transparency in Rome’s politics, which have brought the city to the verge of bankruptcy.

The Five Star Movement’s success is also important because it reminds us, one more time this year, that politics has come of age and that the sex of a candidate can no longer be relevant in deciding whether they are fit to lead.

This is not to say that the Italians suddenly have an Angela Merkel, a Hillary Clinton, a Tsai Ing-wen or an Aung San Suu Kyi in their midst. They don’t even have a Marine Le Pen.

But in a country like Italy, where gender equality is far below the standards of other European countries, where women in parliament are like second-class politicians – too often judged for their looks rather than their politics – it is somewhat uplifting to see that Italians are following in the footsteps of if not yet the Germans or Americans, then at at least of the people of Barcelona, who last year elected Ada Colau, their first female mayor.

Colau, a radical activist, is famous for defending the rights of citizens against the economic interest of powerful elites who threaten them with eviction at a time of deep financial crisis. The seven new female mayors elected last Sunday proclaim to those who care to listen that politics everywhere is undergoing a radical seachange. Whereas the past has been men, the future of politics may well be shaped by women.

Manhood as a compulsory requirement of political leadership is (and it must be seen as) a pathetic relic of a bygone era. Ideally (and perhaps naively), gender – as much as sexual, religious preferences and social background – should never play a decisive role in politics.

Politicians should only be of two kinds: those who truly care about the welfare of the country and its people as a whole, and those who should never be allowed to set foot in a parliament.

Brexit and Italy’s future in the EU

In the wake of the Brexit result, however, the consolidation of the Movement’s credentials takes on a different meaning.

Overall it is not great news for the European Union. Italy, a founding member of the EU, might very soon follow Britain’s example and say “ciao” to Europe. Grillo has always been a harsh critic of the EU. His ideal has always been to abandon the euro, return to the lira and redefine the EU’s rules to allow more governing freedom for its members.

Last year, Grillo and his Movement attracted criticism for joining forces at the EU Parliament with Nigel Farage’s far-right British group UKIP (and the main advocate of Brexit) “to bring down the EU”. Just before the British went to vote, Grillo’s blog published a ten-point clarification on the Movement’s stance on Brexit.

The text is, however, a re-edited watered-down version of a previous post (still available through Google cache) that expressed a much more negative stance on the EU, not very much unlike that of the Leave campaign in Britain.

So, if the Movement’s candidates sweep the next general election in 2018, if not an uscITA (the Italian version of Brexit), at the very least we may expect a hard renegotiation of Italy’s EU membership. Commenting on the elections and on Brexit, Luigi Di Maio, the deputy president of the Lower House of Parliament and the most popular Five Star Movement MP, said that the Movement wants a: … consultative referendum on the euro. The euro as it is today does not work. We either have alternative currencies or a Euro 2. Through its twitter account and Grillo’s blog the Movement commented: Brexit sanctions the failure of the banks, of austerity policies, of the selfish interests of those who negotiate in secret the TTIP (the Transatlantic Trade and Investment Partnership). Now it is enough.

Brexit sanctions the failure of the banks, of austerity policies, of the selfish interests of those who negotiate in secret the TTIP (the Transatlantic Trade and Investment Partnership). Now it is enough.

Though the future is never easy to predict, in a few years we might look back at this past week and realise with painful hindsight that the results of Italy’s local elections and the British vote were the dark omens announcing the end of the European dream. 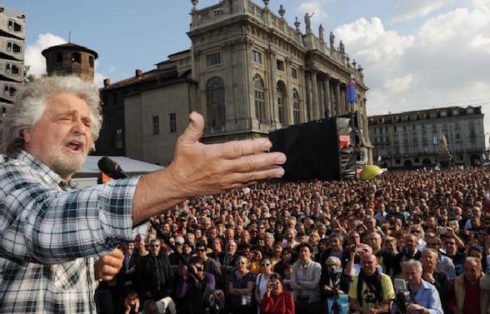 June 24, 2016 - 6:35 am
Published as Giovanni Navarria, 'Beppegrillo.it, One Year in the Life of an Italian Blog 2009', in Adrienne Russell...
© Copyright and Web Design/Management by Giovanni Navarria, All Rights Reserved.
We use cookies to ensure that we give you the best experience on our website. If you continue to use this site we will assume that you are happy with it.Ok