Move aside, now it’s up to us: Italy’s political quake

Summary: Beppe Grillo’s Five-Star Movement is not the antithesis to politics, nor is it the end of democracy; on the contrary, it demonstrates that activism in Italy is alive and kicking.

Italy has recently been struck by two different kinds of earthquakes: one was geological in nature, whilst the other was purely political. Merely by coincidence, both earthquakes had their epicentres in the region of Emilia Romagna, the first near the city of Modena, the second in the city of Parma. The geological quake came unannounced and left behind death, debris and grief. The political quake instead had been in the coming for quite some time.

All started on September 8, 2007, when over two million people gathered in more than 200 cities (in Italy and abroad) to shout vaffanculo (go-fuck-yourselves) to their Members of Parliament. The Vaffanculo-Day Protest was organised by the controversial comedian-turned-blogger Beppe Grillo. Grillo had asked his fellow bloggers to sign a petition to propose a new electoral law. The proposal was composed of three different elements: candidates convicted by courts of law should be forbidden from running for public office; political careers should be limited to only two terms; and the Members of Parliament should be directly chosen by the people.

Overall, V-day turned out to be a success both in terms of attendance and media exposure. Following in the footsteps of the American advocacy group MoveOn, the event was by and large a product of a grassroots group inspired by Grillo’s blog. The final tally of the signed petition was over 330,000 signatures, a number much lower than the unexpected 2 million attendees in the streets, yet over six times more than the 50,000 mark required by the Italian Constitution in order to submit a popular proposal to Parliament.

In the aftermath of the V-day protests Grillo and his Grillini (Little Crickets) – as many in the media referred to the protesters – were accused of gravely undermining the foundations of the Italian representative political system and widening the division between government and governed in order to promote a form of direct democracy in which many see the dark shadows of plebiscitary dictatorship, or the end of democracy as we know it.

Grillo and his followers were accused of lacking a sense of respect for the institutions that govern the country, of shallow demagoguery and populism, even of fostering terrorism: ‘What would happen if a crazy man listening to Grillo’s accusations decided to take a gun and pull the trigger on those attacked by the comedian?’, asked the then director of RAI 2 News, Mauro Mazza.

To explain the phenomenon of Grillismo (the catchword used to describe Grillo’s style of politics), it has frequently been compared with Guglielmo Giannini’s qualunquismo. In 1946, with the slogan non rompeteci le scatole (don’t bother us), Giannini, a journalist, tired of the Italian political establishment, founded Il Fronte dell’uomo qualunque (The Common Man Front). In that year’s elections, the new party, with its antipolitical philosophy and the support of the ‘common people’, surprisingly won 30 seats in the Italian Parliament. Giannini’s ascendance to fame, however, lasted only one term and many critics foresee a similar fate for Grillo. In 2007, those critics discredited Grillo’s ideas and his V-day protest, as many had done with Giannini’s exploit in 1946, as simply inconsequential antipolitics, ‘a mediocre and vulgar matter’, as Eugenio Scalfari, the founder of the influential daily La Repubblica wrote.

In the past weeks, before and after the results of the first round of the recent municipal elections (6-7 May) the same wave of criticism hit the Five-Star Movement (the political movement supported by Grillo and his Grillini, inspired by the political ideas expressed in the Vaffanculo-day petition). But when election-weekend came it captured the votes of a large percentage of the nine million Italians who cast their ballots. The Movement presented candidates in 101 municipalities (out of 941), an electoral area representing nearly 30 percent of the total number of citizens called to vote. In the first round of the elections the movement received almost 200,000 votes, or 9 percent of the total number of valid ballots. In some cities such as Genoa and Parma, the movement’s candidates reached peaks of 14 and 20 percent.

On Monday 21, after the second election round, the Grillini won the mayoral seat in the important city of Parma, together with the smaller centres of Comacchio and Mime. For a political movement that shies away from the idea of coalition and the limelight of television and with little funds to organise their campaigns (Parma’s cost less than 7000 Euros), their results are anything but insignificant.

The success of the Five-Star Movement is one to ponder. It is undeniable that, in the wake of recent scandals on electoral reimbursements, which has hit several major parties across the political spectrum – with The Northern League being the main casualty of the scandal (it lost 7 times out of 7 in the second round) – the temptation to interpret the electoral results as a protest vote is strong. It is equally difficult to deny that Grillo, for better or worse, is one of those polarizing public figures that you either hate or love. He has asked the Movement’s candidates to avoid TV shows on the ground that all TV journalists are nothing but mere loudspeakers of the main political forces; that going on TV, sharing the space with the other parties, would reduce the movement’s credibility; that appearing on TV would make the Movement indistinguishable from the ruling political class.

Nonetheless, the movement and its activists are not the invertebrate personifications of Grillo’s (often) hard-to-swallow ideas or the result of an impromptu political protest; they are not new-recruits of Giannini’s political indifference creed; they are something else. Behind the movement is a hard core of supporters and activists that have been working on this project for a few years already. The philosophy and actions of the Five-Star Movement are the result of a long and complex gestation that started on Grillo’s blog and has now evolved into a mature and active political group whose members have a strong interest in the political future of the communities they live in. They understand the power of social media to reach out to others and know how to use them effectively to organise regular meetings and build a network of active supporters. This movement is not the antithesis to politics, nor is it the end of democracy; but in fact it’s the opposite, it demonstrates that activism in Italy is alive and kicking.

The Five-Star Movement did not go to the barricades, did not throw petrol bombs or shoot anyone. They have gone back to the basics of politics. Its candidates, often using alternative media like the Internet or simply endless door-to-door campaigning, have built strong bonds with their constituencies, have discussed their ideas and increasingly gathered support.

The Five-Star Movement’s approach to politics is simple and effective, yet it is a strategy that many of the major political parties in Italy seem to have long forgotten. Silvio Berlusconi, commenting on the election results, dismissed Grillo simply as the mere product of antipolitics. Yet, he added, the movement’s success is an important warning signal for those who are engaged in politics. “Our kinds of parties, with their overcrowded conferences, large meetings, slow cumbersome decision bodies are dead, are something that belongs to the past, we should follow Grillo’s example or we are done.”

The American historian and philosopher Thomas Kuhn would argue that we are witnessing a gestalt switch, that is a fundamental change in the Italian political paradigm. After World War II and the end of Fascism, it was Christian Democrats vs. Communists; the five-party system of the 80s was brought down by the scandal of Bribesland; the last twenty years were mainly dominated by Silvio Berlusconi and his media regime, while the post-communist Left, for lack of courage and will to renew its ranks, wasted too many opportunities to steer the country to a better route. And now, looking at the last elections, one could be tempted to argue that the time is ripe for the Internet-generation. A generation of Italians who are finally ready to commit themselves to politics and work hard to change the country.

The Five-Star Movement has begun a process of structural and cultural change of the Italian political system, a change which will be crucial in helping Italy out of the economic and social quicksand in which the country is presently drowning. Italy’s crisis is the sour bequest of a political class which, over the last fifteen years, excluding some isolated exceptions, has proved itself to be too mediocre, often vulgar and unquestionably politically incapable.

In a democracy that works well, citizens have the right (and often the duty) to shout go fuck yourselves to those who have betrayed their electoral mandate, in the streets first, as did those who took part in the V-Day protest in 2007, and then, when the opportunity presents itself, at the ballot box, as it has just happened in Italy. This is not simply a shout of protest, but it’s a go fuck yourselves which is expressly political, that is made of commitment and promise. It means, in simple words, move aside, now it’s up to us. 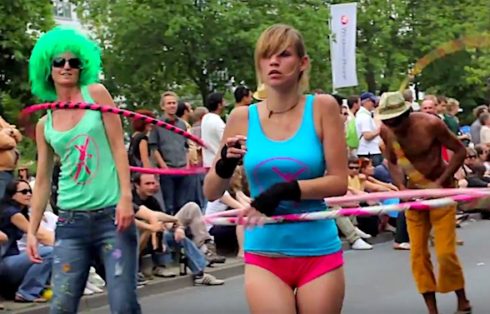