Media, power and decadence: some disquieting trends,  Giovanni Navarria and John Keane was first published on THE CONVERSATION, 01 November 2013

While Australians face the possibility of the first-ever Senate by-election, as well as stormy sittings of a new parliament wrangling over the pro and cons of scrapping a carbon tax, 16,000 kilometres away, in the troubled country known as Italy, an overcrowded parliament is furiously debating whether or not to strip a former prime minister of his Senate seat. The Italian term for this particular case of “stripping” is decadenza, a word from medieval Latin (decadentia) used to describe a process of falling away, or losing someone, or something. In Silvio Berlusconi’s case, the old term decadence assumes a new double relevance. It refers not just to his possible loss of public office but to a deep-seated political trend that is arguably becoming worldwide: the growing use by governments of both mainstream and alternative digital media to wield power over citizens.

Measured in terms of the wider trend towards mediated power, the Berlusconi phenomenon is no Italian anomaly. Berlusconi is not just a serial womaniser, or leader of one of Italy’s three major political forces, or a recently convicted tax evader facing a two-year ban from political life. He symbolises a new decadent trend in all democracies, one that drags them down onto the same plane as so-called “authoritarian” regimes, with which they are conventionally contrasted.

Just as in Xi Jinping’s China, Vladimir Putin’s Russia and Viktor Orbán’s Hungary, Berlusconi’s grip on Italian politics relied on the tactical use of mediated power. Berlusconi spent most of the past two decades mobilising his own media empire to exploit the whole political system, along the way enabling his escape from justice and safeguard his financial empire. The past few months, in the aftermath of his tax fraud conviction, have been no exception in this respect.

Inside and outside parliament, debate rages over Berlusconi’s decadenza. Yet striking is the way his media machine has managed to mount a bold counter-campaign in his support. It depicts him as a victim of a rotten judicial system, a brave figure forced to run because he is being unjustly hunted down.

Sympathetic newspapers, radio and television channels and web-based platforms have morphed Berlusconi into a martyr, portrayed him as a casualty of a heavily politicised clique of allegedly Marxist-Leninist judges who (in his own words) are the true cancer of democracy simply because the man of the people who was chosen by the people should be judged by the people, and by the people alone.

Whatever the outcome of the latest episode in Berlusconi’s 20-year battle to slip through the nets of justice, the Italian case – despite all its strangely local peculiarities – reminds us of the vital importance of the old rule that no democratic system can survive and thrive unless it is embedded within a vibrant media system willing to stand up to governmental power.

The worrying fact is that states and politicians in many different parts of the world are now heavily into the flourishing business of trying to control public and private information flows, which (in spite of all the bumps and grinds) they do with increasing success.

A poet once remarked that the times, they are a-changin’. They are, but potentially for the worse. With varying degrees of sophistication and success, many governments, across the political spectrum, now routinely use crafty methods to control journalists, media firms and information flows, sometimes to the point where so-called democracies look remarkably like authoritarian regimes.

Cutting-edge cases are plentiful in central and eastern Europe, and elsewhere in the post-communist bloc, where young democracies, trying to cope with fragile institutions, polarised civil societies and transnational economic pressures, are particularly vulnerable to governments’ exercise of mediated power. Something similar is happening in more than a few Asian countries.

In Malaysia, for instance, mediated power has been a major factor in the National Front’s decades-long monopoly of government. Most of Malaysia’s traditional national media (radio, print newspapers and television) is owned by or associated with business interests close to the ruling coalition, and strictly regulated and controlled by the authorities. Mainstream media coverage is almost never critical of the government, while the views of the opposition parties are usually given limited space. Not surprisingly, therefore, Reporters Without Borders recently listed Malaysia 145th in the world on its Press Freedom Index, its lowest-ever ranking, expressing concern that “information is becoming more and more limited”.

Singapore (ranked 149th in the same list) exemplifies the same trend. Like the People’s Republic of China, it is a one party-state heavily dependent on mediated power. Through strictly regulated license fees, economic pressure and a widespread culture of self-censorship, the ruling People’s Action Party (PAP) has for many years maintained tight control over mainstream media. Directors of major media companies are filled with PAP members, or by executives directly linked to the party.

It is true that during the 2011 general election, when the PAP again won an overwhelming majority of seats (81 out of 87 seats), Singapore’s polity was rocked to its foundations. The PAP secured only 60.1% of the vote, the lowest figure since independence in 1965.

It seemed that the days were over when PAP leaders could successfully demand deference from citizens, in the name of “Asian values” and Confucian norms. Yet there are signs that the ruling party is now gearing up to outflank a citizenry that has become accustomed to freewheeling blogs and online forums.

Singapore’s Media Development Authority (MDA) recently announced a series of new regulations to tighten the government control of online media, especially internet sites that are critical of the PAP, or regularly report on Singapore and have significant exposure to Singaporeans.

The MDA now requires these sites to apply for individual licences, which must be renewed annually. Each renewal is subject to a “performance bond” of 50,000 Singapore dollars and the sites must agree to remove any “objectionable” content within 24 hours of receiving a request from the government.

The Singapore government plans to extend this ruling across borders, to include overseas-based sites that report regularly on the country’s affairs. The thoroughly 21st century model of mediated power they have in mind attests to the way in which “Eastern” and “Western” cases of mediated power are today converging, and probably on the ascendancy. There is even evidence that they are actively comparing notes and swapping and applying new methods of controlling their citizenry.

The whole trend ought to be worrying. It casts a long shadow over the future of democracy, and prompts more than a few disquieting questions. In matters of media and government, are old ideals of “press freedom” increasingly outflanked by new government surveillance and control methods that dig so deeply into citizens’ daily lives that “press freedom” becomes but a meaningless euphemism?

What can journalists and scholars, citizens and their representatives do to reverse the trend? Or are we drifting hopelessly, irreversibly towards a brave new world of unrestrained mediated power? Is it a future that will force us to give up the whole idea of democracy and its old-fashioned ideal of chastening and humbling the powerful, bringing them down to earth by placing them under public control? 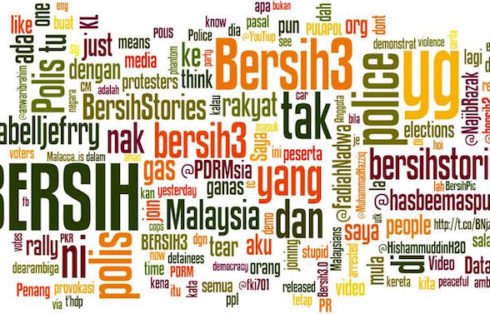 May 17, 2013 - 4:30 am
This is a short paper I recently published in openDemocracy. Origitnal title: Malaysia After the Election: A Paradigm...
© Copyright and Web Design/Management by Giovanni Navarria, All Rights Reserved.
We use cookies to ensure that we give you the best experience on our website. If you continue to use this site we will assume that you are happy with it.Ok