Originally published in The Conversation, October 8, 2016 (link) with the title:

Looking back at 1992: Italy’s horrible year

This article is part of the Democracy Futures series, a joint global initiative with the Sydney Democracy Network. The project aims to stimulate fresh thinking about the many challenges facing democracies in the 21st century.

This essay is the first of a four-part series dedicated to Italy’s recent political history and how much the country has changed since the corruption scandals in 1992.

Italy 1992 is a well-crafted, mostly well-acted and rather entertaining drama that manages to capture, quite successfully, the bewilderment of a country on the verge of  nervous breakdown.

Beyond its high cinematic value, Italy 1992 principally serves as an eerie and timely reminder of the abysmal lows politicians can reach, as well as the long-term damage populist propaganda, people’s anger, and a compliant media (among other factors) can wreak on a country’s fragile democratic system. Certainly, the events narrated in the series offer us key insights for understanding contemporary Italy. More than two decades later, is the country really in better shape?

1992 was one of the worst years in Italy’s recent history.

The country’s spirit hit its nadir between May and July, when the two leading magistrates in the fight against the Mafia and their entire security detail were killed by two separate bombs in Sicily.

The bomb that killed Giovanni Falcone exploded on May 23 near the small-town of Capaci, on the highway connecting the cities of Palermo and Trapani. Two months later, on July 19, Falcone’s friend and closest collaborator Paolo Borsellino died when a car packed with 90kg of Semtex-H exploded in Via d‘Amelio, in the centre of Palermo.

Under their leadership, the so-called Anti-Mafia Pool had achieved what many believed impossible: not only bringing hundreds of Mafia affiliates to stand trial, but also convicting them to lengthy jail sentences.

While these weren’t the first instances of the Sicilian mob murdering a representative of the state, the scale of the killings of the summer of ‘92 had never been seen before.

Millions were in shock as they saw the images coming from Sicily on TV. There was something deeply unsettling about them, they didn’t fit the picture of a country at peace. Instead, the devastation caused by the two earth-shattering blasts reminded many of a war-zone.

The assassinations of Falcone and Borsellino were unequivocal acts of ruthless defiance of state authority. The message Cosa Nostra had sent out was loud and clear: you are not untouchable. Amidst growing criticism, the state reacted by deploying an initial contingent of 9000 soldiers to Sicily. This was the start of a massive operation of homeland security that would last for six years and eventually involve more than 150,000 officers, non-commissioned officers and soldiers.

Democracy in Italy, many thought, was at risk. 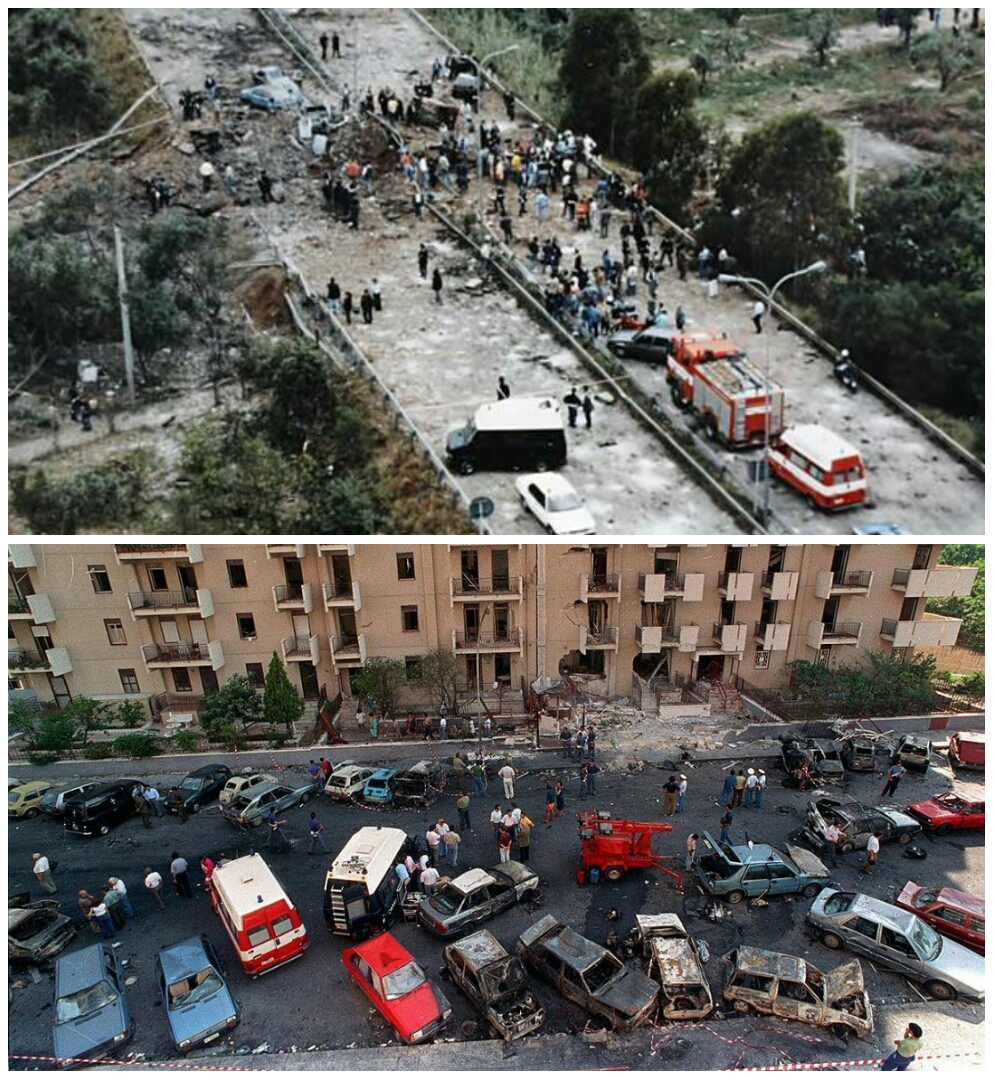 Others, however, believed the greatest threat for Italy’s political status quo did not come from the Mafia’s reaction to the state, but rather from the work of another group of judges in the country’s north. That year, Mani Pulite (Clean hands), an investigation of the District Attorney of Milan, brought to light a deeply corrupt nationwide system that had, for decades, made bribery and kickbacks the tacit code binding together politics and businesses. It showed politicians’ thirst for money and power had no moral compass. The welfare of the people played no part in their decisions.

There were no rules that could not be bent; there were no controllers that could not be bought. Slip an envelope full of cash into the right person’s pocket (especially if that pocket is a secret Swiss bank account) and you could achieve the impossible: build block of flats on lands subject to landslides; sell contaminated blood supplies to hospitals; pay a judge to turn a blind eye.

The scandal, known as Tangentopoli (Bribesville), caused an earthquake of unprecedented force. It was so powerful and – to a certain degree – so unexpected that the foundations of Italy’s political establishment were (mostly) reduced to rubble, having to be rebuilt from scratch.

Ultimately, the scandal was instrumental in reshaping the electoral map from north to south. Parties that, for half a century, had played a very dominant role in Italian politics were wiped out. The Christian Democracy Party and the Socialist Party were the most prestigious casualties. The two had come, respectively, first and third in the general election of April 1992 (in between them only the Communists); but two years later, when a new general election was called, the Christian democrats disappeared and the socialists became irrelevant.

For many, 1992 marked the end of an era. It was a watershed moment. The somewhat glorious past – that had seen the country renounce fascism, abdicate monarchy, embrace democracy and quickly turn post-World War II wreckage into a social and economic miracle (becoming one of the largest economies of the world in the process) – was over.

The Milan magistrates had opened Italian politics’ very own Pandora’s box only to find out that it contained worse evils than most had imagined, and no apparent trace of hope.

One main character in Italy 1992’s fictionalised story is Leonardo Notte, a slick and cynical ad-man who believes that his job’s principal duty is understanding how people think and act. In the third episode of the series, Notte (played by Stefano Accorsi) describes the widespread feeling that runs through Italy during that year as an ‘irresistible wave of schadenfreude’.

The German word perfectly captures the pleasure the common people derived from seeing corrupt politicians and businessmen publically shamed. Italians wanted revenge against a crooked political class that had let them down. The daily scandals unearthed by the Milan prosecutors, the violent shockwave of the bomb blasts in Sicily and the plunging economy enraged the electorate and cleared the way for a new era – the so-called Second Republic – to begin.

At the 1994 general election, two years after the magistrates began their investigation, Italy found itself at a political crossroad. People had the option to either hand power over (for the first time) to the Communist party, the only major political force that had survived Bribesville’s earthquake unscathed; or choose someone (supposedly) new. The result revealed history’s quirky sense of humour.

The Communists and their ideology, whose disastrous failures were epitomised by the recent collapse of the Soviet Union, lost.

The winner was a newcomer, at least in the political arena: Silvio Berlusconi, the media-tycoon-turned-politician, who has since become more renowned for his many trials (for fraud, false accounting and bribery), his unrepentant philandering and Bunga Bunga sex parties than for the enlightened value and financial acumen of its neoliberal policies.

For years Berlusconi had been the protégé of Bettino Craxi, two-time Prime Minister and the leader of the Socialist Party. But the tycoon’s luck ran out when Craxi became the biggest fish caught in the net of Clean Hands. Unquestionably, one the most memorable moments of that period involved Craxi. On April 30, 1993, the day after the House of Representatives had vetoed his indictment, while leaving the Hotel Raphael in Rome, the former Prime Minister was confronted by a mob of angry people waiving 1000 Lire bills and tossing coins at him whilst mockingly chanting: Bettino, why don’t you take these ones too?

The Socialists leader rapid fall from grace (he eventually fled to Tunisia to avoid jail, where he remained under the protection of his friend Ben Ali’s government until his death in 2000) forced Berlusconi to take action.

After an unsuccessful search for a suitable candidate to support at the 1994 election, fearing the worst (the Communists in power while the judges start digging into his dealings with Craxi) Berlusconi had no other choice but to enter the political arena himself.

Winning the election was his only hope of evading jail-time and protecting his collapsing economic empire. Once elected, Berlusconi brought to government a coalition comprising his own personal party Forza Italia (founded with the spoils of the Christian Democracy party and the Socialists diaspora) and two right-wing parties, the xenophobe Northern League and the fascist National Alliance.

Rise and Fall of King Midas 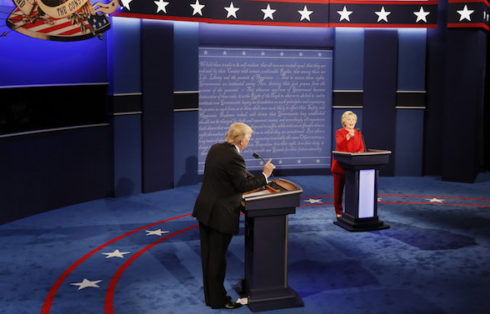 September 29, 2016 - 7:58 am
Originally published in The Conversation, September 29, 2016 (link) This article is part of the Democracy...
© Copyright and Web Design/Management by Giovanni Navarria, All Rights Reserved.
We use cookies to ensure that we give you the best experience on our website. If you continue to use this site we will assume that you are happy with it.Ok