Power, Politics, and Resistance in the Internet Age 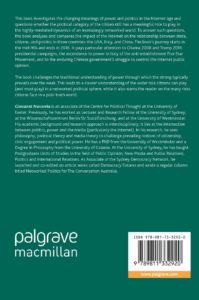 This book investigates the changing meanings of power and politics in the Internet age and questions whether the political category of the citizen still has a meaningful role to play in the highly-mediated dynamics of an increasingly networked world. To answer such questions, the book analyses and compares the impact of the Internet on the relationship between state, citizens, and politics in three countries: the USA, Italy, and China. The book’s journey starts in the mid-90s and ends in 2016. It pays particular attention to Obama 2008 and Trump 2016 presidential campaigns, the ascendance to power in Italy of the anti-establishment Five Star Movement, and to the enduring Chinese government’s struggle to control the Internet public opinion. The book challenges the traditional understanding of power through which the strong typically prevails over the weak. This leads to a clearer understanding of the wider role citizens can play (and must play) in a networked political sphere, while it also warns the reader on the many risks citizens face in a post-truth world.

Giovanni Navarria is an associate of the Centre for Political Thought at the University of Exeter. Previously, he has worked as Lecturer and Research Fellow at the University of Sydney, at the Wissenschaftszentrum Berlin für Sozialforschung, and at the University of Westminster. His academic background and research approach is interdisciplinary; it lies at the intersection between politics, power and the media (particularly the Internet). In his research, he uses philosophy, political theory and media theory to challenge prevailing notions of citizenship, civic engagement and political power. He has a PhD from the University of Westminster and a Degree in Philosophy from the University of Catania. At the University of Sydney, he has taught Postgraduate Units of Studies in the field of Public Opinion, New Media and Public Relations, Politics and International Relations. As Associate of the Sydney Democracy Network, he launched and co-edited an article series called Democracy Futures and wrote a regular column titled Networked Politics for The Conversation Australia.

Internet Politics in Italy, The role of the Internet in China, the power of networks, the networked citizen, Critical analysis Beppe Grillo and his Five Star Movement, role of the Internet in American Presidential Campaigning, Critical Analysis of the Monitorial Citizen, meaning of civic engagement in the 21st century, meaning of political power in highly technological societies.


© Copyright and Web Design/Management by Giovanni Navarria, All Rights Reserved.
We use cookies to ensure that we give you the best experience on our website. If you continue to use this site we will assume that you are happy with it.Ok